Rising bills mean a growing number of older people are likely to claim pension credit as they struggle to pay essentials this winter.

Having savings can affect how much people get in pension credit, but a rainy day fund of up to £10,000 won’t count if your income is low and you follow other rules.

Nevertheless, this savings threshold has not changed since 2009, and although inflation has remained low for many years, a £10,000 fund is certainly worth much less than it was then.

You can earn thousands more from help with housing, heating, council tax, TV licenses and other bills, and it unlocks the recent Treasury cost of living payment .

Struggling older people are being urged by the government to apply for a pension credit in an advertising campaign tackling myths that might deter them from applying – including whether having savings, a pension or owning a home are obstacles.

Financial industry activists led by influential pundit Henry Tapper have also launched a campaign to seek out the nation’s worst-off retirees to entice them to sign up for pension credit.

What are the savings rules for pension credit?

You can have up to £10,000 in savings and investments without it affecting your pension credit if you meet other eligibility requirements.

This is to recognize that many older people will have built up a reserve of money over their lifetime, even if they have low incomes, so they have something to fall back on in an emergency.

The government also does not want to penalize people for saving.

However, every £500 you have in savings over £10,000 is counted as £1 of income per week when calculating your pension credit.

So £10,000 is not a hard limit, just the threshold beyond which the amount of supplementary pension credit you get starts to be affected.

However, this creates an actual or assumed interest rate on savings of over 10% – £1 for £500, which you certainly don’t get from savings accounts.

It’s not as punishing as it sounds if you only have small amounts above £10,000, as it only applies to the part of your savings above that level.

Meanwhile, in terms of other income, here’s a full list of what counts for this (your state pension, other pensions, any income) and what doesn’t (housing allowance, council tax reduction).

As mentioned above, the savings threshold has been frozen since 2009. There is no law mandating a review every year as is the case with some other key benefit figures, so changes are at the discretion of the government.

Should the savings threshold be changed? That’s what the retirement experts say

“The pension credit is means tested – but the ‘means’ that are tested are no longer what they used to be due to inflation,” says Henry Tapper, chairman of AgeWage and Pension Playpen.

“Updating the amounts people may have in their accounts before losing a pension credit claim is both fair and easy for the Department for Work and Pensions to do.

‘An announcement from the DWP on this could cause many to re-examine the pension credit and forays into the roughly 850,000 eligible but not claiming pensioners.’

Are you old and anxious about bills?

Their staff will check that you receive everything to which you are entitled, including pension credit and care allowance.

You can also use this free online calculator to check if you are entitled to the pension credit.

Learn more here, or call Age UK who will help you apply.

Age UK adds that energy suppliers have a duty to offer support if people are struggling with bills or debt, and you can contact your supplier directly to request an affordable repayment plan.

“Older people are very worried when they see their savings used for day-to-day bills,” she says.

“It’s hard for them to replenish their savings and there may be emergency bills they can’t cover.”

Age UK staff can help callers to their free helpline to apply for pension credit – see box to the right.

Stephen Lowe, director of retirement specialist Just Group, says: ‘The lower capital limit of £10,000 means that every £500 of savings – not including primary residential property – held by people eligible for the pension counts as £1 of income per week, which can erode income from the benefit.

“This seems unfair on two fronts given that many retirees will be looking to keep a rainy day fund in case of emergency repairs or large, unexpected costs.

“That’s the equivalent of an interest rate of 10.4%, about three times higher than most of today’s best savings rates.

“Secondly, the limit has not moved since 2009 and so it is likely that more and more people will see their benefit income reduced as they fall into this bracket.

Lowe says the key remains raising awareness of the pension credit and providing support to help people apply, because too many people are currently missing out on the valuable income it provides.

He notes that it is important that people are encouraged to check their benefit entitlements and pension credit rules before tapping into other potential sources of income, such as taking a lump sum from their pension to preserve their savings.

This may inadvertently tip them over the £10,000 savings threshold, and they will find that the benefit they get is reduced. 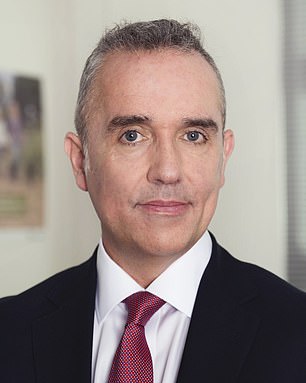 Stephen Lowe: The lower limit of £10,000 hasn’t budged since 2009 and more people are likely to see their benefit income reduced as they fall into this bracket

Former pensions minister and campaigner Ros Altmann said: ‘There are huge problems with the support available for pensioners on the lowest incomes.

“Many are too proud to ask for what they see as ‘handouts’, even though it is part of their entitlements, because we all know the UK state pension is so low compared to all other developed countries.

“Those just above Pension Credit level lose thousands of pounds of extra benefits that Pension Credit recipients can enjoy – such as council tax and energy bill refunds , free TV licenses and health care, so they end up being much worse off than everyone else just because they have small pensions or savings.

“Thirdly, the savings aspect of pension credit does not take into account the actual income that savers receive. If they have over £10,000 in savings, the means test assumes they are receiving a level of interest far, far above market rates – over 10% interest!

What does the government say?

“We want to make sure pensioners get all the support they deserve and during the week of our recent Pension Credit Day of Action, demands were 275% higher than the same week last year. previous year,” a Department for Work and Pensions spokesperson said. .

“Disregarding the first £10,000 of savings and not having an upper savings limit ensures that the most vulnerable pensioners can receive this vital support.

“Alongside the pension credit, our targeted action – including winter fuel payments, additional £300 cost of living bonuses for pensioners and our energy measures – supports millions of pensioners across the country. .”

What other rules should you keep in mind when applying for pension credit?

Some links in this article may be affiliate links. If you click on it, we may earn a small commission. This helps us fund This Is Money and keep it free to use. We do not write articles to promote products. We do not allow any business relationship to affect our editorial independence.

Investing vs Saving – Key Differences and When to Choose

The quota of 200 dollars of savings in US dollars is renewed: who can access it and how many pesos are needed

With the beginning of May comes renewal of the monthly quota of US$200 per person to access the official dollar plus tax, making it 65% more expensive. Unlike previous months, the distance of solidarity with the blue dollar gets smaller: this Monday, May 2, they separated only $2.09. Even in mid-April, the situation arose that […]

Image source: Getty Images There is a misconception that if I don’t have any savings I can’t start investing. It’s not true. If I have an income, I can reduce some spending habits and use that money to invest in the markets. One of the best ways to build long-term savings is to invest in […]